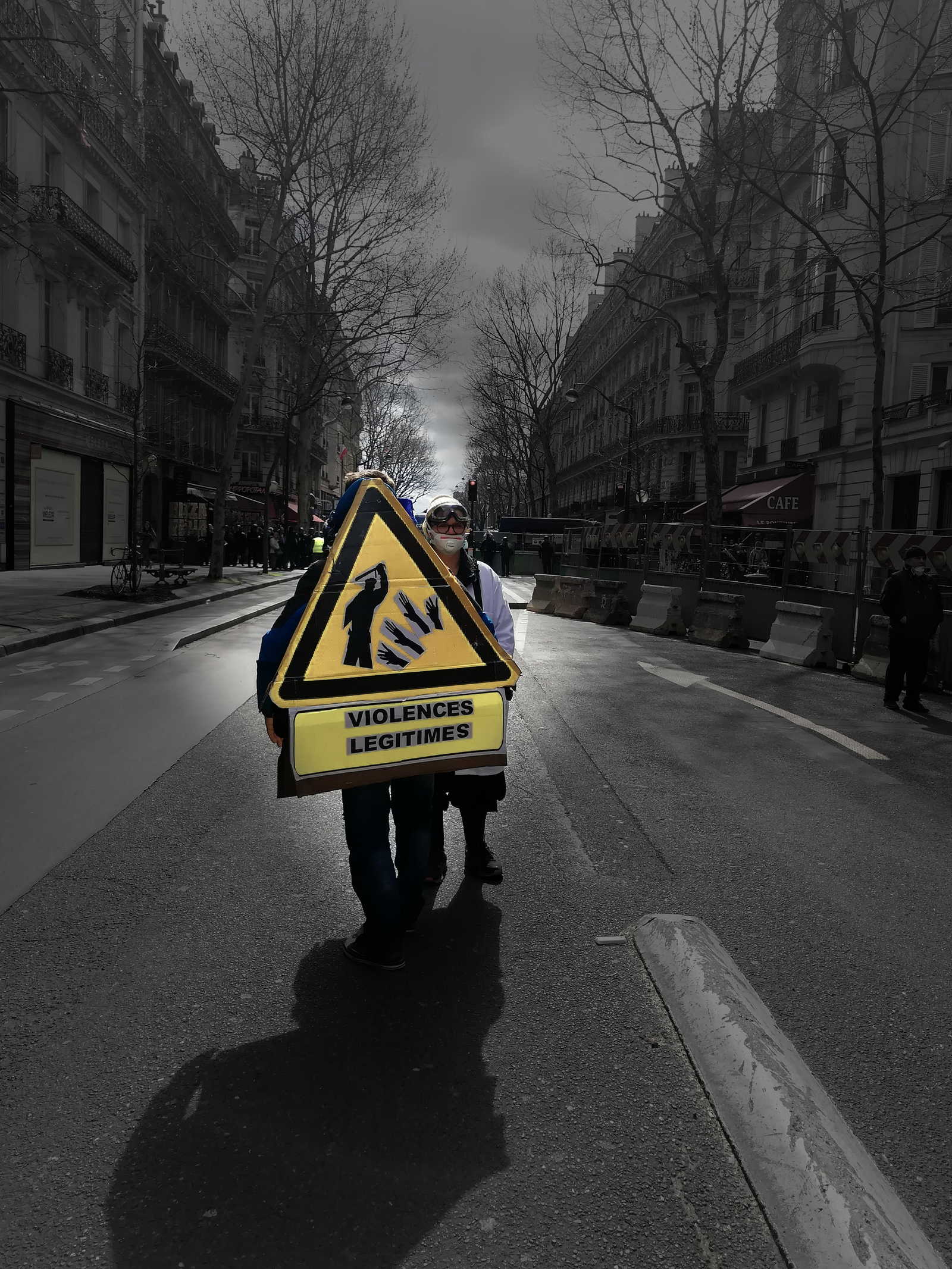 Paris / France. The “Ligue des droits de l’homme” (LDH / League of Human Rights) condemns the police violence during the demonstrations of the Gilets Jaunes (Yellow West).
In their press release of 18 January 2019, the non-governmental organisation denounced the French state for deliberately intimidating the population. Among other things, it suggests that participants in unannounced demonstrations bear their share of the responsibility for the riots.
Since the beginning of the Gilets-Jaunes movement, there have been around 5500 arrests, over a thousand convictions and thousands more police warrants. An indeterminable number of these were preventive and based on an inadequate legal situation. Vice already reported on this from the court case after the riots on December 1st, 2018 (Act III), when the strongest riots occurred in the French capital. 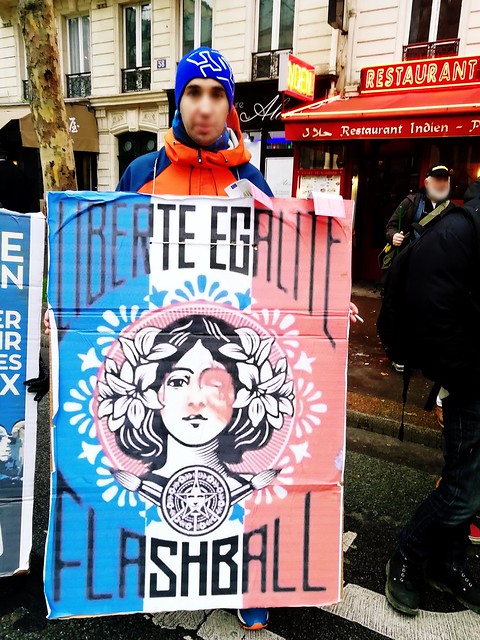 A protester is showing a banner at the ActX (19/01/19) of the Gilets Jaunes in Paris. On the photo you can see an edited version of an artwork by Shepard Fairy (Obey). Which by the way, is one of the beloved paintings of the french president Emmanuel Macron. Foto by Urbanauth

The widespread use of flashball throwers (LB40) and GLI F4 dispersion grenades is the main complaint of the League of Human Rights, as well as the NGO Defender of Rights (Défenseur des droits). During Act III, we were able to determine that a large number of Lacrymogène and dispersion grenades were thrown by the state. On a lot of our video material you can see bangs of the GLI F4, as well as irritant gas which lies like fog on the streets.
According to the figures of the newspaper Liberation there were about 10.000 grenades and more than 1400 shots with the LB40 on this December day. However, the real number is probably higher, since only the police units CRS and CSI were included in this count and not the BAC, which are rumoured to shoot at faces of demonstrants.
But also at all further acts (III, IV, XIII, IX, X) at which we were on site, we could confirm the substantial use of such operational weapons.
According to the LDH, in 2018 nearly 1700 people were injured or even mutilated by the use of such so-called non-lethal weapons. Among them are women and men with torn hands and/or wounds on their belly and faces with irreparable consequences.
An 80-year-old woman from Marseille, who wanted to close the windows to her apartment during the riots, was struck by a dud and died in hospital as a result of an operative shock.

While the LDH strongly condemns violence on both sides, it is particularly concerned about state violence, which restricts freedom of expression and the right to demonstrate and is damaging to democracy. There have also been attacks on journalists, while filming people have been intimidated.
In their video, the NGO cut together the most striking police riots against demonstrators. These image clips showing violent scenes, went through all social media channels during the Yellow West movement.
The video also shows that the regulations on the use of such weapons were not respected in some cases. The police are not allowed to shoot at the face or the intimate area and are obliged to throw GLI-F4 grenades at ground level, because of the small amount of explosives inside.
It should be noted that also pupils are affected by the police violence by flashball throwers. As in the case of the school protests against the educational reforms and the parcoursup in Grenoble, where a 16-year-old schoolgirl was seriously injured in the face by a flash ball.
But while intimidation continues, the question is whether this violence is justified. And if so, doesn’t it generate the same level of counterviolence?