Lusatia : The battle for the pit. Climate activists in Germany. 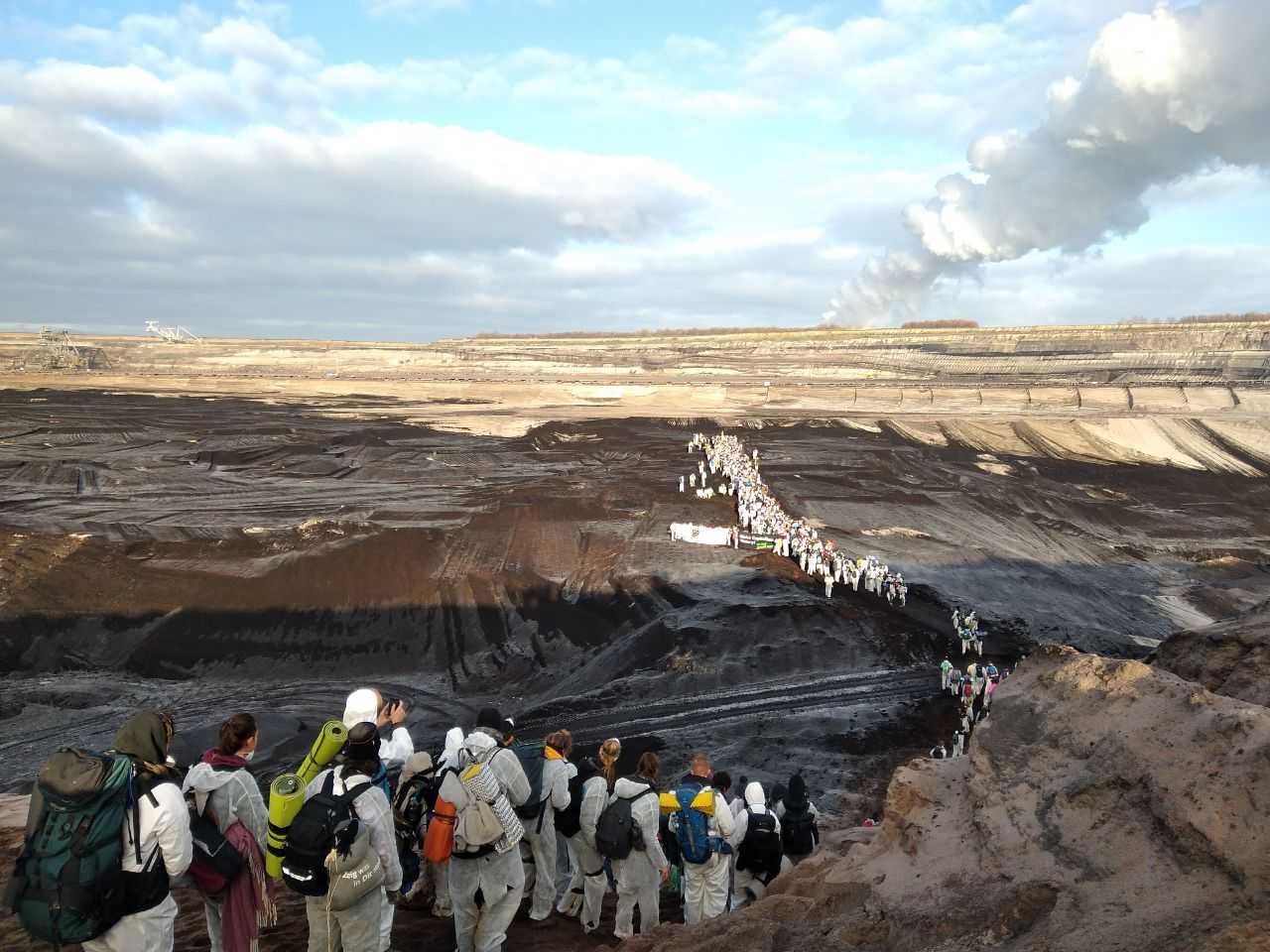 Lignite is one of the most important energy sources for electricity production in Germany, alongside other energy sources. According to the German Federal Ministry of Economics, it accounts for about a quarter of the total share. According to Wirtschaftswoche, approximately 70,000 jobs in Germany are linked to the mining and conversion of lignite into electricity. At the same time, their mining also has devastating consequences for nature. On November 30, 2019, thousands of climate activists in Germany campaigned against the mining of lignite and for renewable energies. The protest alliance “Ende Gelände” called for blocking several opencast mines in eastern Germany by means of mass protests. According to its own statements, the organisation is “a Europe-wide alliance of people from many different social movements”. They organized mass actions in German lignite mining areas since 2015.

Besides an open-cast mine near Leipzig (Saxony), two of the protest focuses were in the southern Brandenburg province, namely Lusatia. It lies on the eastern border of Germany with Poland, along the Neisse (German-Polish border river) between Berlin and Dresden. The protests once focused on the Jänschwalde opencast mine and the Welzow-Süd opencast mine.

Lusatia is generally a structurally weak region, where over the last decades an increasing amount of young people have moved to the big city to study or to find their professional happiness. One could say that the region is slowly but surely bleeding dry. At least that is how many people living in Lusatia see it. LEAG will operate both opencast mines, which provides a large part of the regional jobs. That’s why many residents have no sympathy for the protests against lignite. Some of the protesters against it come from the region. Nevertheless, large groups from the nearby big cities of Berlin, Dresden and Leipzig, travelled to the site.

Already in the run-up there were tensions.

Already in the run-up to the protests there was viral reporting. First, fans of the nearby football club FC Energie Cottbus (fourth soccer division) mobilized with banners against the protest alliance “Ende Gelände”, as the Tagesspiegel reported. Cottbus, with 100,000 inhabitants, is the largest city in Lusatia and also has to struggle with the protests. The fans of the regional league club attracted attention several times in the past to these incidents. With slogans like: “When the end is in the field is not up to you! Our home – our future” or “Smash the end of the field!” the fans expressed their displeasure against the climate activists.

In addition, a picture appeared on the media in which a police unit posed in front of a painted wall with “Stoppt Ende Gelände” written on it. This caused various daily newspapers to mention this incident. As well as on social media platforms, where people justifiably accused the police of violating the principle of neutrality. The police withdrew this unit from duty, initiated disciplinary proceedings and the message on the wall disappeared by over painting it.

According to the RBB, the paint was obviously not enough to remove the slogan fully, and so some remains of the lettering remained clearly visible on the wall. Among them were the lobster (the coat of arms of the nearby town of Cottbus) and the letters “DC”. This again caused a sensation as the meaning of this abbreviation in local right-wing extremist circles is “Defend Cottbus”. In combination with the coat of arms as a sticker motif this is a clear positioning against foreigners and asylum seekers.

The protests began early in the morning.

The tense situation of the demonstrators didn’t lower their motivation and their first actions began early in the morning. With the concept of individual fingers, i.e. different partly coloured groups of activists, they tried to block logistically important points for the operation of the opencast mines. As the TAZ reported, the first blockade was already in place at eight o’clock. Afterwards about 500 activists in white painter’s suits slid down the slopes into the Jänschwalde open-cast mine to occupy the pit.

A group called “Anti-Kohle-Kids” blocked together with another group, including people with walking disabilities, a rail connection to the same open-cast mine. They also blocked tracks to the Jänschwalde power station. About 400 people from the green finger occupied the pit of the Welzow Süd open-cast mine. These and other actions led to the fact that the activity of the Jänschwalde power station had to be shut down and coal trains were travelling at reduced speed.

According to the RBB, some supporters of opencast mining, including the “Pro Lausitzer Braunkohle” alliance, also organised events. Already on Friday a family celebration took place at the Schwarze-Pumpe power plant in Brandenburg. Also on Friday, according to reports by the TAZ, the police picked up eight people. Presumably from the right-wing extremist spectrum, near a vigil at “Ende Gelände”. They were carrying axe handles and quartz sand gloves. Some of theirs were already known to the police for right-wing crimes. In Jänschwalde a vigil was held on Saturday for the preservation of the power plants. The occupants wore black painter’s suits in response to the white and colourful suits of the activists. On one of their banners was written among other things: “We won’t let Lusatia be wiped out”.

However, the climate activists were sympathetic to the fears of the local people. For example, Kaya Fiedel from “Ende Gelände” expressed herself during a track blockade opposite RBB: “I understand people in Lusatia who are afraid for their professional future and also the anger. But I believe that the anger is actually directed more at the politicians, who for decades slept through the process of initiating structural change in an orderly fashion.”

In the various news portals as well as in the social media there was a media tug-of-war about the contents and events of the day of action before, during and after the protests. According to the Tagesschau, a blockade of the tracks immediately in front of the power plant attracted a lot of attention. As the LEAG on Twitter spoke of an attempt by the demonstrators to storm the power plant.

The German Press Agency (dpa) said that about 200 activists had tried to get onto the site of the power plant. Parliamentary observers from the Left Party and the Greens contradicted on site the accounts and assured that a storming of the power plant had never been planned. The LEAG also made it clear on Sunday that it was probably only the impression of the demonstrators that prompted them to post their Twitter message.

Despite the tense situation in Saxony and Lusatia, the politically opposing positions, the 41 registered meetings with up to 4000 participants and the massive police presence of 2700 officers, the protests were largely peaceful. Towards the evening, the climate activists ended their actions. The demonstrators meticulously collected their garbage. Afterwards they left again by busses and trains.

A press release from “Ende Gelände” speaks of successful mass actions against the climate crisis and for the coal exit. Alliance spokesperson Nike Mahlhaus said: “We are happy with the successful action and happy that we sent such a strong signal for climate justice today. Today, 4000 climate activists together blocked coal infrastructure” and also commented: “If political leaders fail to protect the climate and our livelihoods, we will implement the coal phase-out ourselves”.